What do you do if you’re a national company employing more than 200 people and you have 30 vacancies across the business?

“We were getting busier after Covid but we were also losing people,” he said. “The mining industry here was sucking a lot of resources out of every industry. We hadn’t lost anyone through Covid, but all of a sudden we had this problem where we couldn’t replace people, we couldn’t find qualified fitters anywhere or glass technicians, and we certainly couldn’t find experienced tinters.”

The family-owned business, headquartered in WA, has more than 50 workshops across Australia and New Zealand, offering windscreen replacement and tinting services. Having dozens of vacancies for skilled employees — from system manager roles to tinters and fitters — during a massive, nationwide labour shortage was starting to impact service delivery.

“It was causing us issues, obviously,” Andrew said. “With our name, Instant Windscreens and Tinting, we like to get to people’s problems as quick as we possibly can. We try to provide same-day services. But having a lack of resources sometimes doesn’t allow you to do that. Sometimes we pushed out one, two, three days at a time. Sometimes we were passing up jobs because we just did not have the resources.”

Instant Windscreens is not alone in struggling to fill vacancies. More than half of all Members surveyed for Capricorn’s State of the Nation 2022 report said finding qualified staff was a big challenge facing the industry. One in five said it was a major challenge they were facing in their own business.

Andrew said Instant Windscreens tried everything, from ads on SEEK to the Australian Government’s Workforce site. They considered investing in younger or inexperienced staff and training them up — and it is still part of their strategy — but with a six- to 12-month training period, that alone couldn’t solve the problem.

"Also, if you’ve got trainees on, and then you push them a bit too quick and you start giving them jobs before they’re ready, you can sometimes get warranties coming back, whether it’s leaking windscreens or windscreens not fitting properly. Reputation is built not only around service but quality of workmanship as well."

It was then Andrew sat down with his Capricorn area manager for a general catch-up about how business was going. “They said, ‘Well, we’ve got a new supplier on board called the Philippines Recruitment Company’. So, they put a proposal together, we discussed it at our board level and got the go-ahead to try it out and see how we go.”

Looking overseas for staff hadn’t been part of the plan but pursuing it, ultimately, meant Instant Windscreens was given Federal Government permission in November 2021 to hire 105 experienced technicians over the next three years.

By August this year, eight had already arrived and were working at branches across the country, and 20 more had been hired and were going through the immigration process.

"Our main aim is to bring in very highly skilled labour,” Andrew said. “The people we’ve brought in so far, they’ve got eight to 10 years’ experience. These are people we can use to train up our young Australian trainees in how to tint cars and so on. So, it’s a twofold effect for us, of bringing in highly skilled labour that suits our needs, but also brings the skill set that we can teach to our trainees."

Greg Holmsen, Chief Executive Officer of The Philippines Recruitment Company (TPRC), said Instant Windscreens was far from alone in looking overseas for qualified labour during the skills shortage. Greg said it is becoming a more and more popular option for businesses in the automotive industry in particular.

“We started in business 10 years ago,” he said. “Pre-Covid we were placing around 25 people a month (in jobs in Australia) and now it’s closer to 60 — and the main industry we work with is automotive.

“The great thing about the Philippines is that a lot of the guys have worked in the Middle East, in the automotive industry, so they’ve all had really good, branded experience with training and so on. So, they fit really well into our workshops here.”

TPRC has been placing qualified workers from the Philippines in businesses across the industry, from light vehicle servicing for workshops to heavy diesel mechanics in the mining industry. 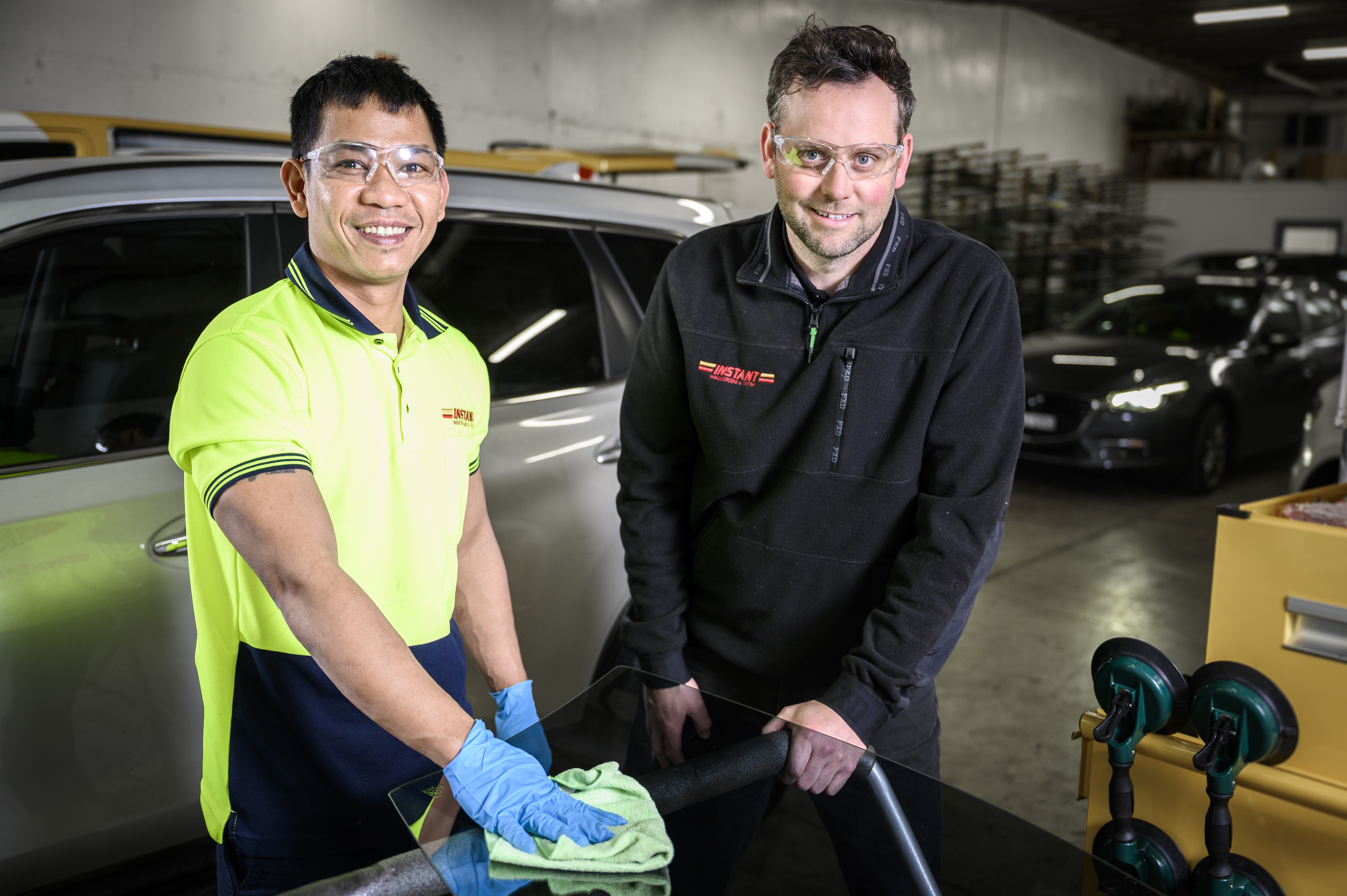 The result? According to Greg, it’s not just a lot of happy customers; it’s a lot of very happy Filipino workers.

"We guarantee the person for two years. These workers are extremely loyal, they appreciate the opportunity they’re getting. (For the workshop owner) you’re changing someone’s life."

“I’m really passionate about transforming lives. We have a lifetime relationships program. When someone jumps on a plane out of the Philippines, we genuinely care for that person. Their commitment and their journey is what’s really important to us. We want to make sure that person is successful. And making sure the candidate is successful turns into the client being successful, because they get the longevity from their employee.”

The relationship is a win-win: the candidate gets a great job and a fantastic opportunity to work and build a life in Australia, while the business gets a loyal and hardworking, skilled employee, who may also be well-placed to help train and upskill the next generation of Australian talent. So, what’s the catch?

"It costs money,” Greg said. “And it takes time. But it’s a solution."

Greg said potential candidates also go through a stringent recruitment and practical skills assessment process to ensure they’re suitably qualified for any position, including an English skills test to ensure they can communicate to a level suitable for Australian employment. Candidates who make the cut are then put forward for clients to consider for a position.

Greg said it can cost about $20,000 per employee to get them through the recruitment and immigration process, including visas and fees to the Australian Government. Dealing with the bureaucratic processes is the other potential stumbling block. It’s a multistage process. For Instant Windscreens, that included an extra step getting glass technicians and tinters added to the Australian Government’s priority migration skilled occupation list.

As part of the process, Andrew and his team were able to not just interview candidates, but test their skill set via video link to the Philippines, giving them peace of mind they were recruiting suitably skilled technicians with good English. The resulting recruitment decisions have been a great success.

“We’ve found most of the guys are really respectful and they’re really good workers,” Andrew said. “We set them up with some accommodation when they get here, until they’ve acclimatised. Our end game is to help them bring their families to Australia. We’d love to help them become Australian citizens. That’d be great for us, as well, because it shows them we’re genuinely interested in them, and we genuinely care. We want to make sure they’re settled in correctly and that they love Australia.”

Instant Windscreens has seen the benefits of this kind of recruitment strategy before, so they know it works. Ten years ago they recruited a team member from the Philippines. A decade later, he’s a naturalised Australian, he’s still with the company, and he’s a popular member of the team.

Which raises another common question workshop owners might have about recruiting from the Philippines: how the locals respond to the new recruits.

“We’ve had no feedback from our own people about bringing in staff from overseas; I think because they all understand the reality of the situation at the moment,” Andrew said. “When you talk to other people in business, they’re all really supportive of the idea. They usually ask if we can bring some staff over for them, too.

"Our intention would always be to employ Australians first, but this is really helping us get through the skills crisis. It’s not a replacement recruitment strategy; it’s just another avenue for us to find people with the right skill sets."

Recruiting from overseas may not be an affordable or practical solution for every workshop owner. But if it’s not something you’ve considered before, and if you have the means, it’s clearly an option that’s working for other companies in the automotive industry. At a time of ongoing skilled labour shortages, surely every option has to be on the table?

ExpandStronger TogetherIndustry
Back to Latest News
This article was published 31/10/2022 and the content is current as at the date of publication.