What your turnover says about your happiness

Does the turnover of your business have any connection to your happiness? Find out what the data from the State of the Nation has to say.

We discovered some interesting connections in the data from our latest State of the Nation report. Surprisingly, there seems to be a relationship between turnover for a workshop and the owner’s level of happiness. We’re going to take a peek into the numbers behind the report and show you what we discovered.

Along the way, we’ll also explore the connection between success and happiness. In the end, we suggest a lesson from the data that you can apply to your own pursuit of success and, ultimately, happiness.

The big picture: how Members feel about success

Let’s start by looking at what Capricorn’s survey of Members, State of the Nation 2021, has to say about success. One question asked was, “How successful do you feel?” Here’s what respondents had to say:

You can see Members are generally a pretty successful-feeling group.

But the really interesting question the survey also tried to answer was, “What does success mean?” In other words, when Members report feeling successful, which factors are they taking into account? Here’s what they said: 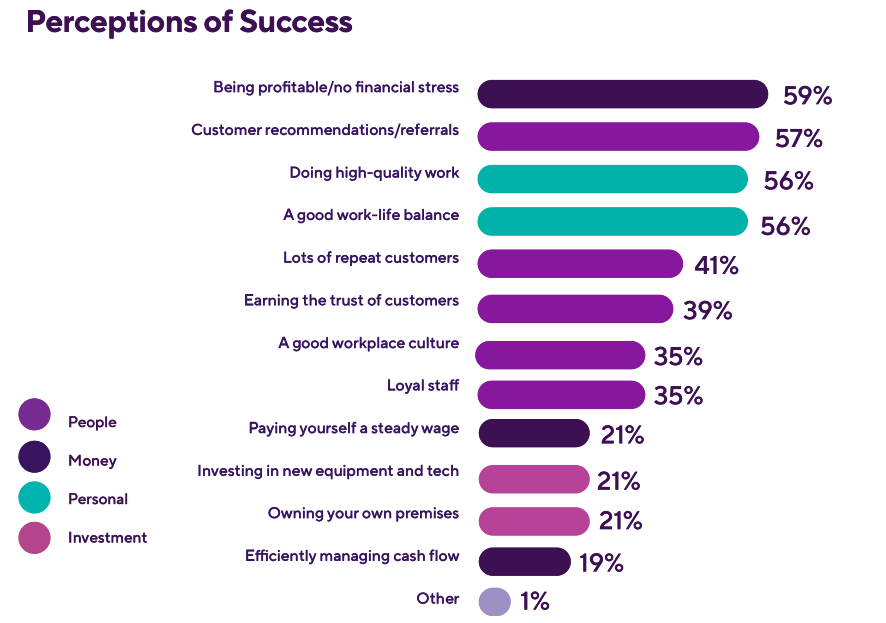 As you can see, there is a fair amount of variety here. The top answer is probably no surprise. When most people think about success, financial considerations are the first thing that comes to mind. But many respondents also identified factors that relate to the work they accomplish and to the people involved.

But how does turnover relate to all of this? To answer this question, we’re going to take a look at some of the data not published in the official report.

Before we get to that, however, it would be helpful to have a sense of how Members are distributed when it comes to turnover. The data we’ll be looking at divides respondents into three groups, according to annual turnover:

Twenty per cent of Members who participated in the survey fell into the first category, 49% were in the second, and 22% were in the third. (Nine per cent chose not to reveal their turnover.)

So, what’s the relationship between turnover and feelings of success? Here’s what the data shows:

“How successful do you feel?” (% saying “very” and “extremely successful”)

On average, higher turnover equates with greater feelings of success.

That’s not exactly a shocker, is it? But, recall, we said we were going to be talking about how turnover relates to happiness. Higher turnover may mean a greater sense of success, but does it also lead to a greater sense of happiness? We think the data gives us some reasons to think so.

But before getting to that, we need to pause to consider what happiness is in the first place and how it might be related to success.

We all want happiness and many thinkers throughout history have suggested the search for it is our most basic drive. Yet there isn’t a clear, agreed-upon definition of what it is.

Philosophers have weighed in on this question for centuries. More recently, psychologists have taken a more data-driven approach to try to figure out what happiness is really all about.

One thing both the philosophers and the psychologists would mostly agree upon is that happiness, at least the kind we’re really after, isn’t just a matter of feeling good. The mere pursuit of pleasure in its various forms is not likely to lead to a life we’d call happy.

Instead, the kind of happiness most people really want seems closer to what we might call meaning. This takes us beyond a focus upon pleasant feelings to questions like, “Does my life seem to have a purpose?”, “Am I contributing to something bigger than myself?”, and “Do I feel I am part of a community?” Being able to answer “yes” to these questions is strongly connected with having the kind of deep happiness for which we long.

In fact, the director of the longest continuously running study on happiness in the world, the Harvard Study of Adult Development, begun in 1938, concludes the single most important factor for human happiness is the quality of our relationships.

What does all this tell us about the connection between success and happiness?

For one thing, it tells us our picture of success is really important. If, for instance, we understand success as simply getting lots of money, we’re likely to find that achieving it doesn’t contribute much to our happiness — at least not in the long run. (It could even hurt it as we suffer the disappointment of realising what we thought would make us happy has failed to do so.)

On the other hand, if success to us means giving value to other people, then our attaining success is likely to increase our sense of happiness as well.

Let’s return, then, to the chart above labelled, “Perceptions of Success”. The different options here represent alternate ways to think about success. “Being profitable/no financial stress” for some might be just about earning more income. For others, as the wording seems to suggest, it might involve merely the absence of something (stress) that tends to erode happiness.

Several of the other options, however, point in a direction of greater potential meaningfulness. “Doing high-quality work”, for instance, is connected to our sense of contributing something to the world. “Earning the trust of customers”, and “a good workplace culture” both concern the quality of relationships.

Given what we’ve said so far, it is plausible to suggest that those for whom success is more about relationships and contribution will tend to be happier than those more focused on financial matters.

Can we see any indication in State of the Nation that turnover is connected to what Members have in mind when they think about success?

Turnover and what matters for success

The survey data doesn’t directly answer our question, but there are some intriguing clues that point to a difference between how those with the lowest turnover and those with the highest define success.

One table in the data sorted Members’ perceptions of what success means by their level of felt personal success. (Recall from the data presented above that the higher the annual turnover, the greater the felt level of success reported. This makes good logical sense. If your revenues are low, you’re unlikely to feel very successful.)

This table reveals an interesting difference. Those reporting the lowest levels of success are the most likely to identify “being profitable/no financial stresses” and “being able to pay yourself a steady wage” as markers of success.

On the other hand, those reporting the highest levels of success were most likely to select “customer recommendations/referrals”, “doing high-quality work”, “having lots of repeat customers”, “earning the trust of customers”, and “having a loyal staff”.

The last thing we want to look at is the way Members responded to a question asking them to what extent they agreed with a set of statements. Here’s what caught our attention:

Both of the questions point to the degree of focus upon relationships with staff. The higher the turnover, the more important these aspects are taken to be.

Of course, one thing that might explain the difference here is that higher turnover businesses tend to have more staff, making these concerns naturally more relevant.

But whatever the explanation, the end result is the same: the lower turnover workshops are focused less upon relationships with staff. And this means they’re less occupied with something that connects more strongly with happiness.

Improving your own success — and happiness

What should you take away from all this? We have seen that higher turnover correlates with higher reported feelings of success. The data also suggests it correlates with a picture of success that focuses more on relationships (with both customers and staff) and contribution.

If what psychologists tell us about happiness is right, we can conclude that higher turnover will tend to be connected with a more robust happiness.

One consideration based on the data: shifting your own focus in terms of what counts for success more towards relationships and the difference you make for customers could well enhance your happiness.

An interesting question is whether the different orientation towards success possessed by Members achieving the highest turnover is in part responsible for the greater flourishing of their enterprises. If it is, shifting your focus might just improve your bottom line, too.

If you found this discussion interesting, we encourage you to download the State of the Nationreport for plenty of other insightful data on the Australian automotive aftermarket.

BusinessMaintain
Back to Latest News
This article was published 23/05/2022 and the content is current as at the date of publication.