The winner of the 2022 Capricorn’s Rising Stars Apprentice of the Year has been revealed. Congratulations to Marama Thompson, from Auto Super Shoppe Eurotech in Hamilton, New Zealand. 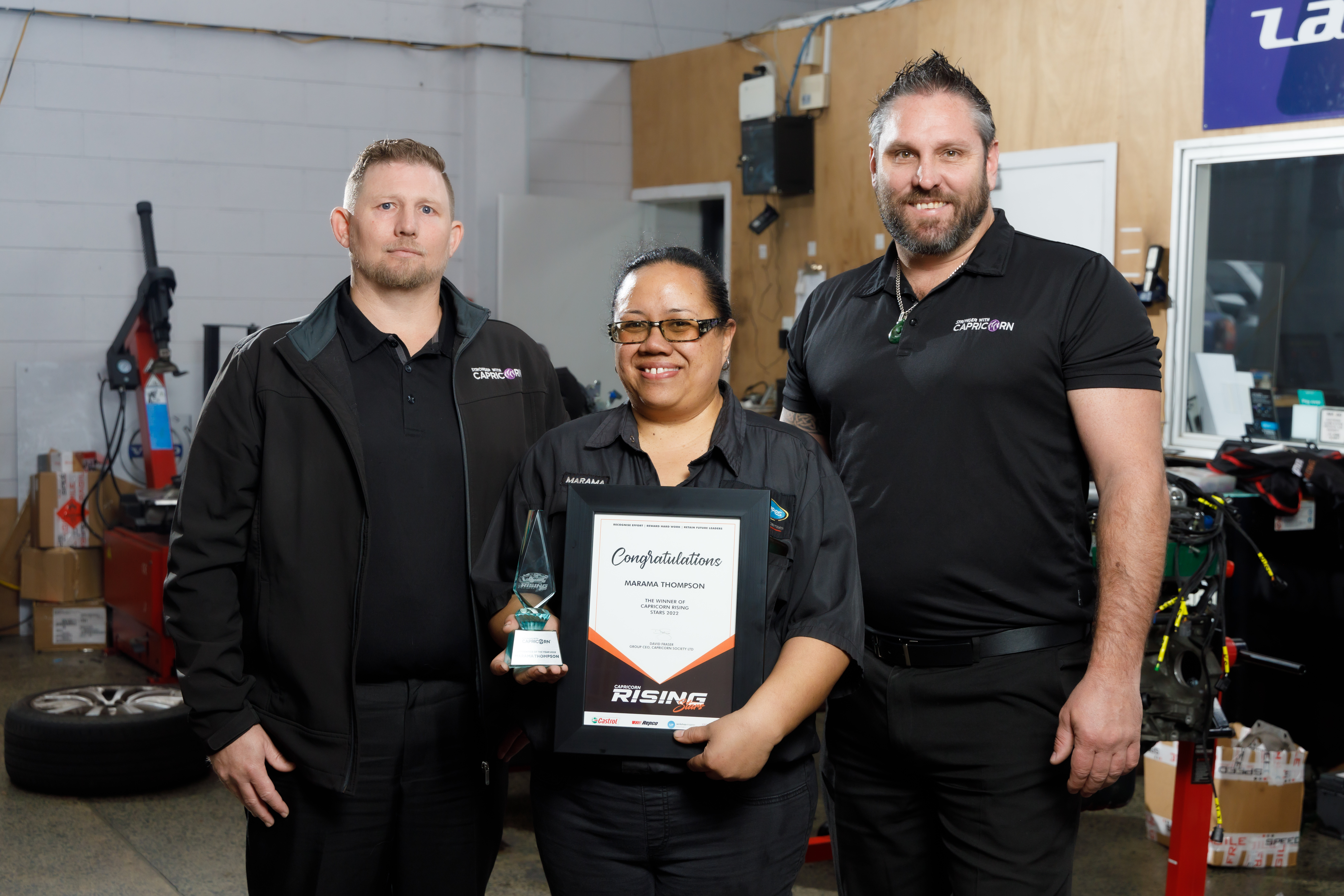 Australasia’s largest automotive cooperative, Capricorn, is proud to announce the new winner of their apprentice of the year award, Marama Thompson.

The prestigious achievement award recognises talented apprentices who show initiative, thirst for knowledge and commitment to the automotive industry.

Marama Thompson, from Auto Super Shoppe Eurotech in Hamilton, New Zealand has consistently demonstrated these qualities across all aspects of her work. This is the second consecutive year that an automotive apprentice from New Zealand has taken the top honour.

According to Marama Thompson, “I had always dreamed of becoming an automotive technician, working on cars and owning my own workshop since I was young.

“My drive is trying to figure out the whys of vehicle issues and sorting a solution to the problem, then to see it leave the workshop with a customer driving it, as opposed to seeing it arrive on a tow truck. The joy of another car fixed and roadworthy and a real happy customer makes me very proud of what I do,” Ms Thompson said.

“My greatest accomplishment so far is being on the tools under the hood, working on cars. I have great support from my boss who is always there if ever I need help. I am still learning and I’m enjoying learning something new every day.

“One of my biggest accomplishments was being nominated for this award, let alone now having won the Capricorn Rising Stars competition. I guess I’m just living my dream, with great support behind me,” Ms Thompson added.

According to the owner of Super Shoppe Eurotech Hamilton, Nik Fowlie, from the moment Marama joined, she became the missing piece of their business puzzle.

“She is a superstar! Marama has only been with me for one and a half years and has now become my second in charge. She can fix cars and run the front of house, while also dictating workflow to the rest of the technicians.

“She always shows up early and is usually one of the last to leave. Her mechanical aptitude is the best that I have seen in my 16 years of the trade. She will become an amazing technician or service manager one day.

“Her customer service is second to none and I can feel confident that she has a handle with the customers and preparing their invoices, despite her short amount of time in the trade. She is always willing to learn and to better herself,” Mr Fowlie stated.

The 2022 Capricorn Rising Stars Apprentice of the Year was selected from an impressive 341 apprentices nominated by Capricorn Member businesses located across Australia and New Zealand from the entire spectrum of repair and service disciplines.

This competition serves to highlight the importance of apprentices to the Australian and New Zealand automotive aftermarket industries. The competition also seeks to encourage new talent to join the industry, ultimately generating more qualified automotive repairers to ensure the industry’s continued future growth and strength.

Capricorn CEO Automotive, Brad Gannon, stated “Encouraging and acknowledging future leaders is an important part of growing and supporting the automotive industry. We at Capricorn want to help our Members strengthen their teams and believe that recognition and reward will help businesses attract and retain the best talent.”

The new Capricorn Rising Stars winner has even set the goal set to bring more new people to the industry, people who just like her, may not have thought it was possible.

“I put my passion on hold because I had always been told that I wouldn’t make a good technician due to being female in a male industry. Don’t let anyone hold you back, I have had so much support since the beginning of my career and I’m loving it every day.’

“My ultimate dream is to become qualified and open my own Auto Super Shoppe workshop, equipped to do mechanical, electrical, panel beating and painting. Then I would eventually like to set up an academy or school in a spare space of my workshop to teach and train the new generation of apprentices coming through - giving them the opportunity I was given,” Ms Thompson stated.

Capricorn thanks all of its Members who nominated their apprentices along with award sponsors Castrol, Repco and The Workshop Whisperer for taking part in this most valuable of automotive aftermarket industry recognition programs.

Look out for the return of the Capricorn Rising Stars competition in 2023. To find out more visit www.capricorn.coop.