Passion and work-life balance the secret to success for Caroline

Passion and work-life balance the secret to success for Caroline

Caroline shares her successful journey in the industry, and her best tips to achieve work-life balance while doing what she loves

A career in the automotive industry was not the future anyone had mapped out for Caroline Langan-Minca.

Not herself — she planned on becoming a forensic psychologist. Not her parents — she came from a family of academics. And certainly not the teachers at her private girls’ school.

“It was expected you would go to one of two universities and if you didn’t, you were excommunicated; you were never spoken about again,” she said.

Caroline followed the path laid out for her, going to university in 2000 and studying a double degree in criminology and psychology. Although she enjoyed some of the subjects, the prospect of seven years of study “just killed me inside”.

“I thought, right, I really love cars, I’m going to defer for a year and go and do a pre-apprenticeship course,” Caroline said. “I figured if I hated it, I’d only have wasted six months. But if I love it… well… what if I love it?”

It’s not much a spoiler to tell you that Caroline did, in fact, love it. More than two decades later she runs and co-owns His’n’Hers Automotive Solutions in Kilsyth, Victoria, with husband, Craig Minca. They’ve been in business for 14 years.

“My experience is in stark contrast to what a lot of people see our industry as being. You hear people say, ‘mechanics can’t lie straight in bed’ or ‘you’ll never find an honest mechanic’. I know heaps of honest mechanics. I know so many people in the automotive industry who are really topnotch people, who are highly educated, who are passionate about their industry, who know so, so much about their field of expertise.

Caroline started her career with an apprenticeship at Mazda in the Melbourne suburbs, where she enjoyed the variety of the work she was asked to do.

“I liked the fact I could be a service advisor in the morning and deal with customers, then go into the workshop and work on the cars, then go back out in the afternoon and be a service advisor,” she said. “It meant you were never bored. You can switch hats, change roles. If you’re a person who thrives on a challenge and variety, then this is the industry for you, because it’s there if you want it.”

It was at Mazda that Caroline met her husband. She and Craig would leave to work at other workshops for a few years, before buying Montrose Automotive Services (the future His’n’Hers) in 2008.

“We were working ridiculously long hours for someone else and we thought, ‘wouldn’t we rather be doing this for ourselves?’,” she said. “We bought the business and just hit the ground running. It was a business that had a good reputation but the guy was retiring so he hadn’t done anything to build it up for about five years. He was winding it down.”

At the time, the business was four hoists and two mechanics. Now, there are five mechanics (including Caroline and Craig) and an apprentice. 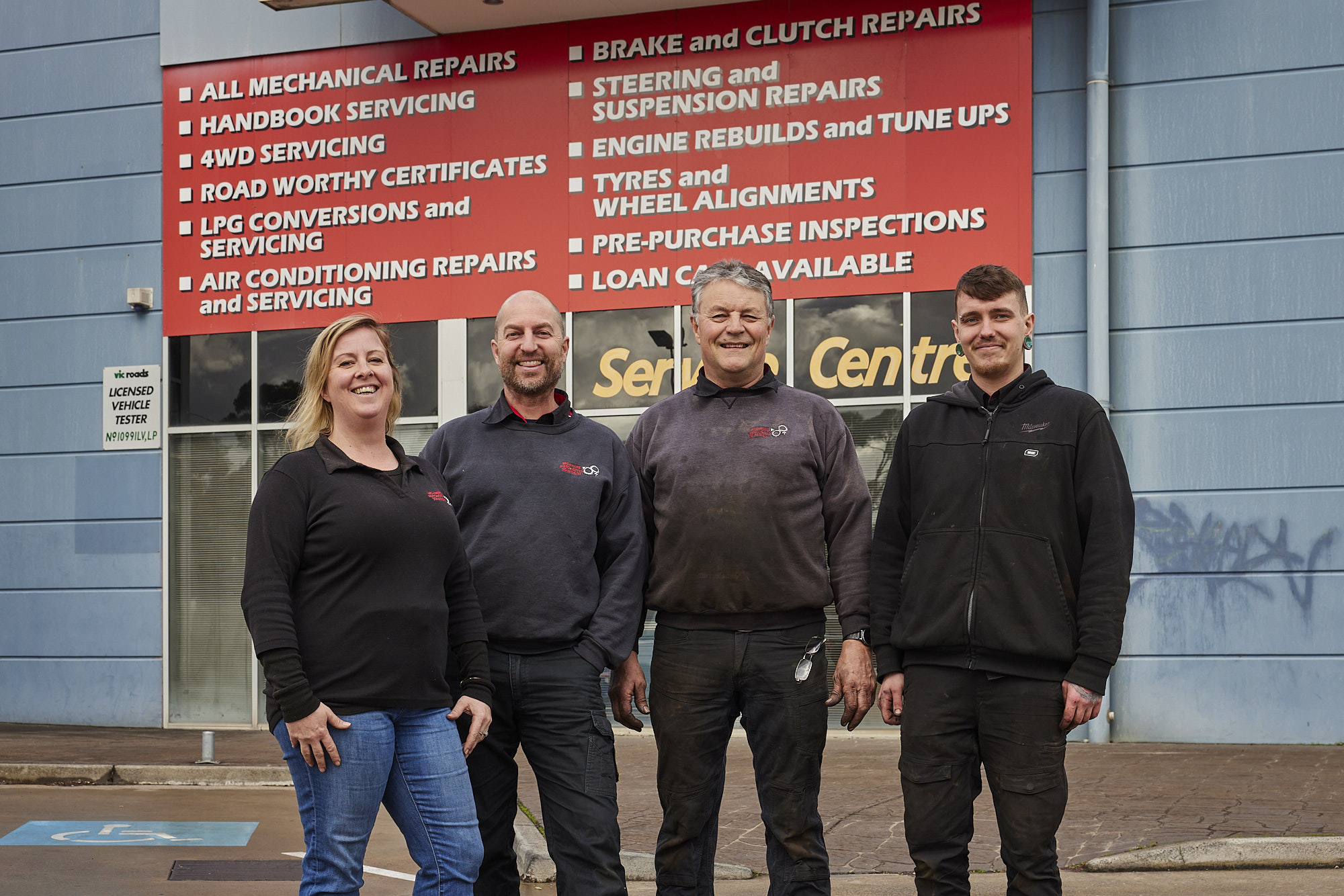 “We could build it up more but, to be honest, we actively choose not to because running a business is really stressful and work-life balance is actually more important to us,” Caroline said.

When Capricorn asks Members about the biggest challenges they face in our annual State of the Nation survey, maintaining a work-life balance is consistently one of the top issues. Caroline and Craig now seem to have the formula cracked, but it didn’t come easily.

“We realised pretty quickly we needed to work around school pick-ups,” she said. “We worked out that I would open up in the morning and Craig would do the school drop off. Then I would leave at 3 pm and go do the school pick-up, take the kids home and get the dinner organised, and Craig would do the shop lock-up. That way, neither of us was at the shop for 10 plus hours. It also meant the kids weren’t in after-school care, which saved us $600 a week.”

Two years into running the business though and the still-hectic lifestyle of running their own business was beginning to show. A warning from the doctor about Caroline’s health lead to a real shake-up in the way they operated.

“We stopped working Saturdays,” she said. “We started training our customers that we shut at 5 pm. We’ll wait until five-past, but that’s it. We have loan cars or key drop off and lock-up spots customers can use. If anyone asks, we just tell them we have kids at home and we’d rather be with them. Everyone says, ‘fair enough’. The customers have been absolutely fine with that. We’re just not going to do ridiculous hours anymore.”

These days, Caroline works three days in the business and Craig works four. 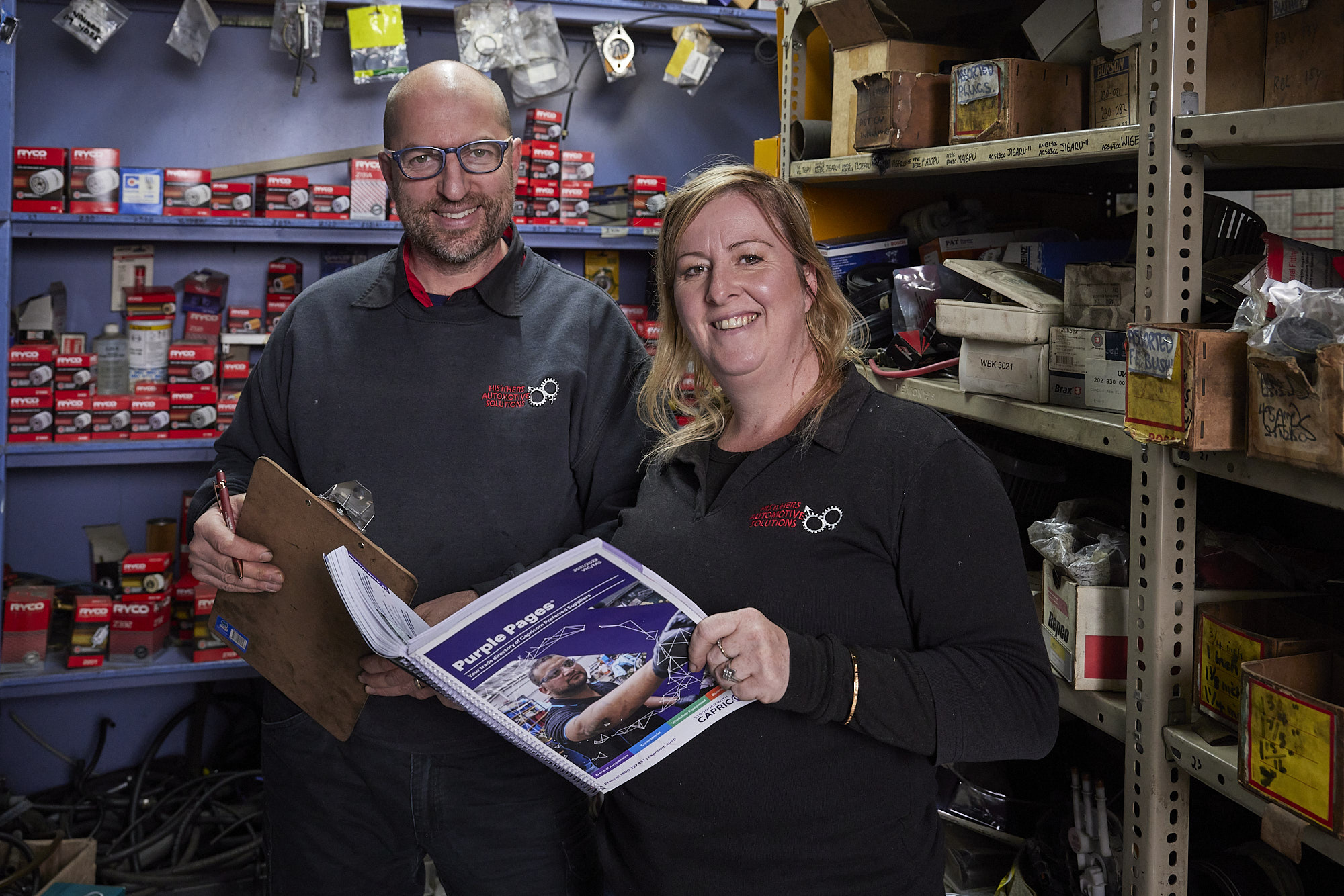 Caroline says prioritising work-life balance has been one of several ingredients in His’n’Hers’ longevity and success. It frees up time for her family and for her other great passion in life, her horses. Another secret to success has been leveraging the workshop’s female-friendly credentials.

“We get a lot of reviews and feedback from people saying they feel comfortable coming here because they know I’m behind the counter,” she said. “Even on the days I’m not here, they know this is a very female-friendly place and that we explain things very thoroughly.”

A shelf filled with parts is kept specifically to show customers examples during service explanations.

“A bent valve in someone’s head, if they know nothing about cars, is a hypothetical part,” she said. “They don’t know what it is. Unless they can see it, it means nothing. When you show them, it makes people feel like they have some power over what’s going on in their car.”

A career in the automotive industry might not have been the path anyone expected Caroline to take all those years ago, but building a successful business in an industry you’re passionate about, and having happy customers and a good work-life balance, is a satisfying road to tread. Even Caroline’s old school has changed their tune.

“They invite me back for careers nights now,” she said. “I’m the poster child for trades — and I service all the teachers’ cars!”

IndustryInsights and Trends
Back to Latest News
This article was published 26/08/2022 and the content is current as at the date of publication.