Not everyone gets the opportunity to live out their childhood dreams. But if you work hard and, as it was in the case of Scott Chatwin, make the right friends, you might be lucky enough to make them a reality.

Scott owns Merger Contracting, an asphalt business that runs its own truck repair and service workshop. He realised his childhood dream when he got to compete in his first sprint car race in 2015. Now he has his own sprint car and team.

Scott’s passion for sprint car racing started when his mum would take him to the Claremont Speedway in Western Australia when he was about nine years old.

“It was something that we both looked forward to,” he said. “She enjoyed it, but I never thought that it would get to this point.”

So, how did his dream come true? Scott had a good mate who was running cars for Wormall who hit him up to be a driver. Scott agreed and, with only a little experience under his belt (driving a sprint car on a sponsors’ driving day), entered his first race as a Wormall driver.

“I think I was pretty well overwhelmed because there’s mud flying around and you’re trying to pull a tear off your helmet and get around the track,” he said. “I remember it being pretty daunting to start with, but I’m not one to give in, so I stuck with it and I had a couple of decent crashes, but I was still determined to keep going.”

Scott eventually left Wormall to start his own team: Merger Motorsport. He managed to finish in the top 10 within two seasons.

But life got too busy for the owner of three businesses and crashes too expensive, so he bowed out of driving in 2019.

Kris Coyle now drives the purpose-built Merger Motorsport car, which runs a 410 cubic-inch motor that can produce about 950 horsepower. It weighs about 700 kg, including the driver. The car’s wings are made of light-aircraft aluminium and the panels are lightweight fiberglass and aluminium. Its power-to-weight ratio is comparable to a Formula One race car.

Kris scored the team’s first win at the Krikke Boys Shootout in Bunbury this February. But at the following meeting in Bunbury, after being “miles in front”, a yellow light forced Kris back into the pack and Merger ended up with third place. 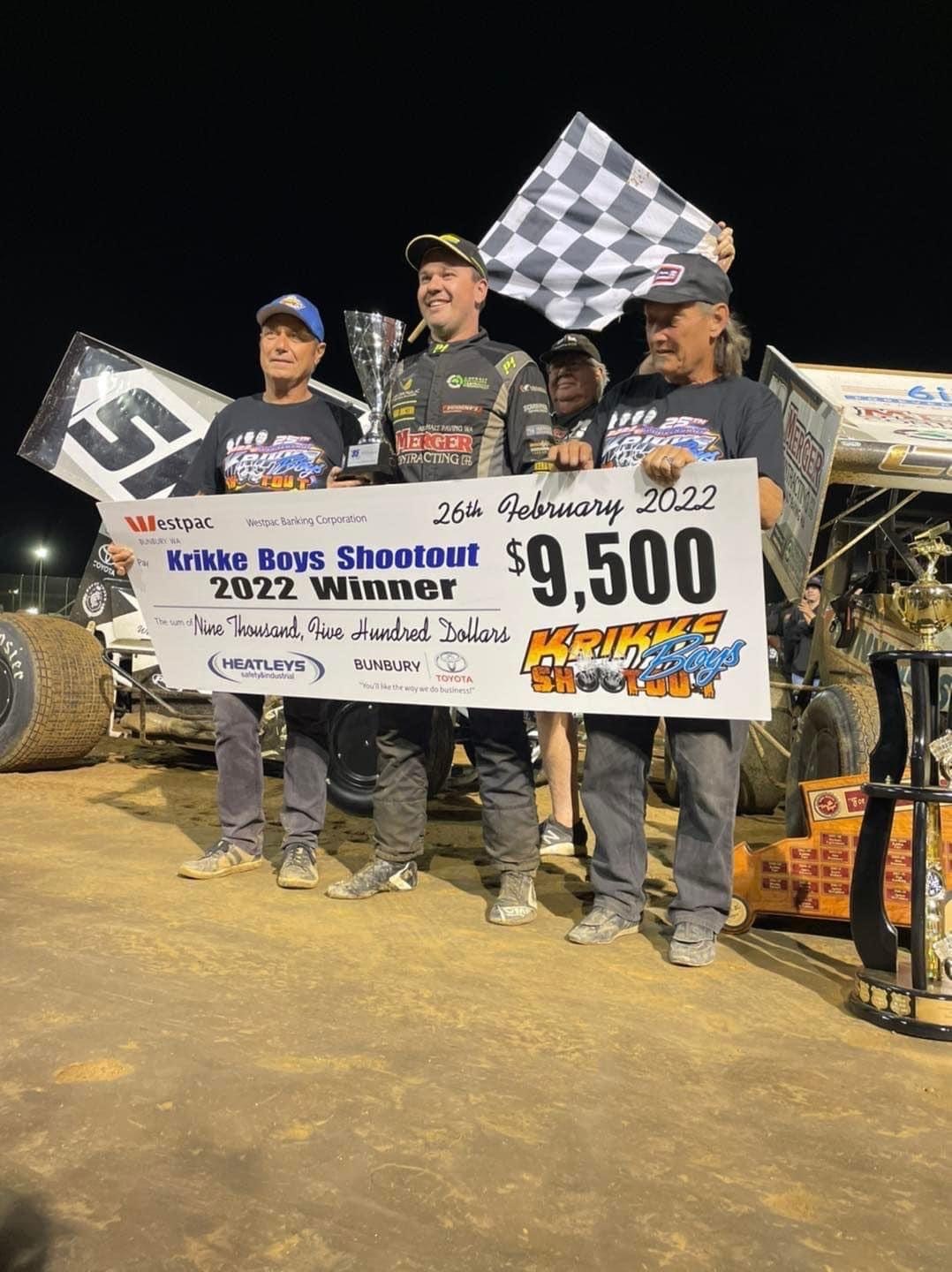 “That’s the way of the motorsport we run,” Scott said. “You can be hero one minute and zero the next.”

Kris, who comes from a racing family, started competing in sprint cars when he was 16, but bowed out of the sport in his 20s until Scott gave him the opportunity to race full time.

Like Scott, he also enjoys the social side of the sport.

“You do make a heap of good mates out of it,” Kris said. “It’s like a second family.”

But the true calling for the self-confessed adrenaline junkie is hitting average speeds of 140-150 km/h while flying sideways around a dirt track.

“It’s just something you’ve been brought up with and it’s in your blood,” Kris said.

Kris, a diesel mechanic, also effectively manages the car, including ordering parts for the vehicle through Merger’s Capricorn account, which he finds really easy.

Merger had an unlucky season this year with some engine issues, but the team still managed to finish fifth.

They have their sights set on bigger things next year. As long as Kris steers clear of the walls and expensive bills, Scott will still be happy no matter the result.

IndustryRev Heads
Back to Latest News
This article was published 08/09/2022 and the content is current as at the date of publication.