One of the most fascinating parts of any Member Ride is finding out how the person and the car came together. Kelvin's story might make you a bit jealous.

Over the years, we’ve heard every kind of wonderful story: Members who’ve restored a car they grew up with, Members who’ve driven across the country to collect a wreck in a paddock and lovingly restored it, Members who’ve trawled car ads for years to find the exact make and model they’ve always loved — and everything in between.

But the “how did you meet” story between Kelvin Parker and his 2021 Ford Mustang GT is a new one on us. And it might just make you a little bit jealous.

“I won it at the Crown Casino, in a competition with Coke,” Kelvin said.

“It is a Limited Edition, race red Mustang GT with a black shadow roof and black stripes, valued at $80,000 — which is not a bad deal for buying a $5.90 bottle of Coke with dinner at the Junction Grill.”

Before you start preparing your voodoo doll, Kelvin is well aware he’s the luckiest man in Australia. It’s hard to imagine talking to someone more stoked about his good fortune than Kelvin.

“I’ve been in love with Mustangs for a long time,” he said. “Every time I go to the United States, I hire one. I’ve been doing that since 1970.

“But I’ve never owned one, and I would probably never have bought one, either, because it was never a family car and, economically, they’re not really that viable.”

But the big fuel bills are now Kelvin’s to enjoy — and he’s not complaining.

Kelvin owns Prestige Sunroofs in the southern suburbs of Perth. He and partner, Someekhae, went to the casino just after New Year’s Day this year. Someekhae enjoys a flutter and Kelvin enjoys the restaurant – and both of them were in luck that day.

“We had the meal and my partner went down to play on the machines, while I stayed for dessert,” he said. “No rush, I said, but 15 minutes later she came back and slapped a ticket on the counter. She’d just won a mini jackpot on one of the machines — $860. 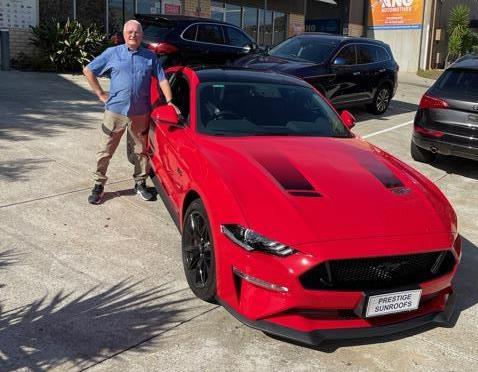 It was as Kelvin was paying the bill the waiter pointed out he’d had a Coke and was therefore eligible to enter a competition. He shoved the information in his pocket and went home. The next day he was at the office doing some paperwork when he found the competition slip in his jacket pocket. Noticing the prize was a red Mustang, he decided to enter.

“I looked at the terms and conditions on the page and it said the competition closed on the Sunday, that Sunday. So, I thought, ‘Oh well, at least I don’t have to wait long’.

“Then on the Monday afternoon the phone rings, and it’s Crown Casino.”

The rest, as they say, is history.

It took a few months for the Mustang to arrive in WA but Kelvin said the agonising wait was worth it (it actually arrived on his birthday — an amazing coincidence).

Kelvin said the Mustang was going to be a weekend and special occasion drive.

“It’s not the sort of car I’m going to park in the street,” he said.

A five-litre V8, 10-speed automatic, the Mustang has a full-width LED dashboard.

“It means you can change all the gauges around to exactly where you want them,” Kelvin said. “It’s got a full LED lighting system in the headlights and sidelights.”

The leather seats have heating and cooling.

What it doesn’t have is a sunroof and, unfortunately because of the shape, one can’t be installed. Still, you can’t win ’em all, can you?

While the story of how Kelvin finally came to own his own Mustang might not have followed the usual path, we reckon it’s a pretty good yarn. It’s also a good reminder that you’ve got to be in it to win it — and you just never know your luck!

IndustryRev Heads
Back to Latest News
This article was published 18/01/2022 and the content is current as at the date of publication.