When will we see autonomous vehicles?

Self-driving cars, or autonomous vehicles (AVs) seem like science fiction to most of us. And it’s exciting to feel like we may be living in Back to the Future or the Minority Report soon.

But fully autonomous vehicles may be a little way away. So, when can we expect them? And what’s coming in the meantime?

SAE International developed the Levels of Driving Automation to explain the progression from human operated vehicles to fully automated vehicles. The levels detail the features required for each of the 5 stages of vehicle autonomy. 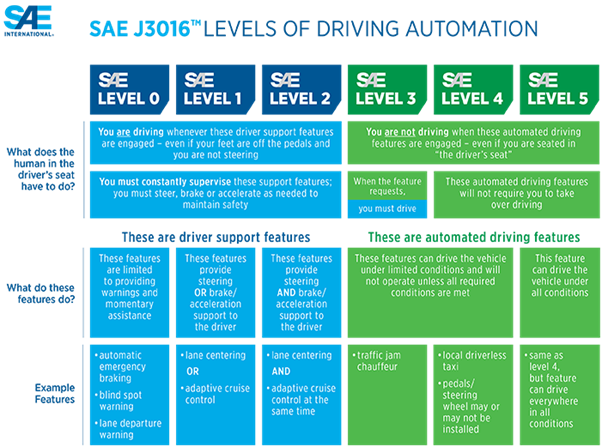 Projections from PwC at the 2021 AASA Vision Conference give us a good idea of when we can expect different levels of AVs. Using projections from the US is a good indicator for Australia and New Zealand, as it’s considered that the US market influences development schedules for vehicle manufacturers.

To understand when we will see AVs, it’s important to understand the challenges still to be overcome. As with any new technological development, how quickly we are able to jump these hurdles will impact when we can expect to see high level 4 or 5 AVs appear on our roads. Here are the four key hurdles facing AVs currently:

What happens when the roads aren’t great? What kind of data will AVs require? How much will AV technology cost? And how long will it take to develop? These are the types of questions we ask when we think about the technology required to facilitate AV function.

A lot of time and effort is currently being expended by vehicle manufacturers to answer these questions. With many manufacturers teaming up with themselves and with Silicon Valley to keep pushing these developments along.

The installed base is influenced by the uptake of AVs by the population and how existing vehicles will be affected. How will AVs interact with human operated vehicles? What will an AV aftermarket look like?

With average vehicle ownership of 10 – 14 years, and over 24 million vehicles on the road across Australia and New Zealand, how quickly will we see AVs penetrate the car parc? In a similar situation to electric vehicles, the true potential will be revealed when most of the car parc are fitted with L4 or L5 systems.

AVs will require us to ask some difficult ethical questions, with equally difficult answers. We will be asking technology or machines to make life or death decisions. And it’s still unclear and untested who is responsible in an AV accident, or who will be responsible for decisions programmed or made by AVs.

Consumer expectations and societies tolerances for safety are going to be very different with AVs in comparison to human operated vehicles. And those expectations are going to lead to new challenges for vehicle manufacturers faced with greater responsibilities than ever before.

So, when do AVs arrive?

Like most things over the last couple of years, Covid-19 has had a major impact on AV development. As the Bosch Chairman noted in May 2020, ‘a lot of partners are suspending investment in AVs, preferring to invest in existing functions and up to Level 2 autonomy.’

In reality, a fully autonomous world is still a way off. However, in the meantime we can expect to see a drastic increase in L1 – L3 vehicles on the roads. PwC project over 70% of new car sales in 2030 to be for L1 – L3 vehicles, making up over 40% of the total US car parc.

L4 and L5 vehicles aren’t expected until after 2030. But don’t fret, PwC expected plenty of testing in the interim. Which means we will start to see some of the technology developed and showcased over the next decade. So, whilst we may not be expecting to purchase an autonomous vehicle in the next few years, we will begin to see what a future autonomous world could look like.

IndustryInsights and Trends
Back to Latest News
This article was published 28/06/2022 and the content is current as at the date of publication.